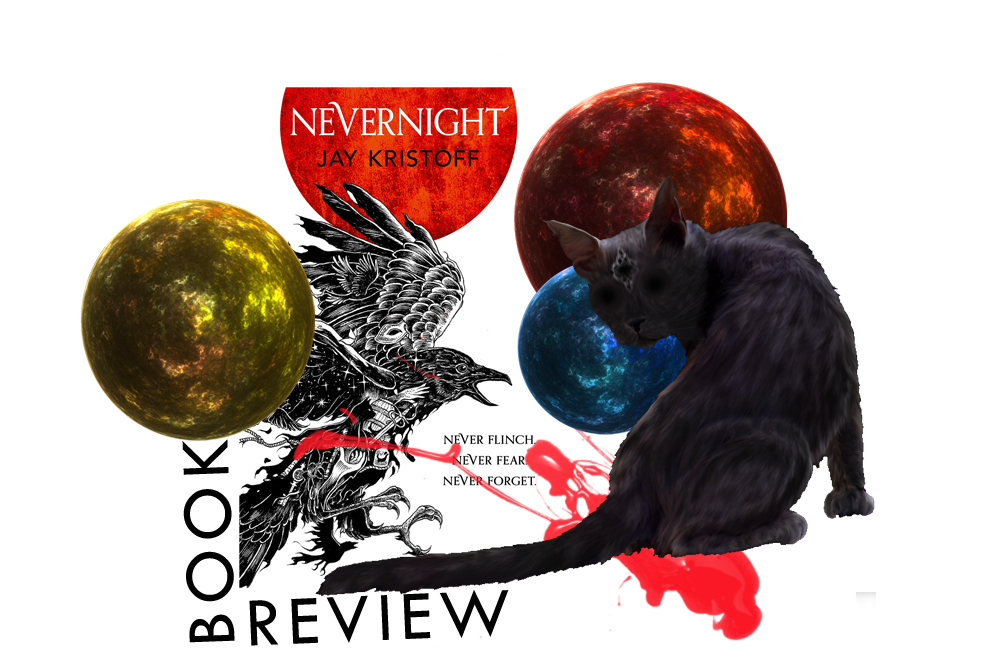 by Jay Kristoff — I don’t have any witty remarks to start this review off, this was just a solid fantasy book that I enjoyed immensely. Compelling and believable world-building, solid characters, and a strong, if commonplace, plot that carried its weight all through the book. That’s it really.

“Daughter of an executed traitor, Mia Corvere is barely able to escape her father’s failed rebellion with her life. Alone and friendless, she hides in a city built from the bones of a dead god, hunted by the Senate and her father’s former comrades. But her gift for speaking with the shadows leads her to the door of a retired killer, and a future she never imagined.

Now, Mia is apprenticed to the deadliest flock of assassins in the entire Republic—the Red Church. If she bests her fellow students in contests of steel, poison and the subtle arts, she’ll be inducted among the Blades of the Lady of Blessed Murder, and one step closer to the vengeance she desires. But a killer is loose within the Church’s halls, the bloody secrets of Mia’s past return to haunt her, and a plot to bring down the entire congregation is unfolding in the shadows she so loves.”

Mia, the protagonist, is a really likeable character. I have a fondness for outwardly cold female characters that use their prickly exterior as a shield to hide not only their past hurts, but a soft mushy middle built on loyalty and kindness. Sometimes you have to dig to find that mushy middle, but that’s half the fun. Sometimes that mushy middle can coexist with utter ruthlessness, and that’s even better.

Some of the side characters weren’t as well-rounded as her unfortunately. There was a secondary antagonist whose personality, besides being a thorn on Mia’s side, was non-existent. A teacher who hated her for a flimsy reason, there’s always one of these in any fantasy school worth its salt, though, so it didn’t bother me too much, cliché as it was. Some tropes just come with the field. It also didn’t bother me that there were a few characters whose arcs didn’t seem to go anywhere, since this is a series and I’m hoping they’ll be more fleshed-out in the next books. I’m particularly curious about Hush.

I wasn’t a big fan of the romance either. I can see some people loving Mia’s love interest in this book though, he just didn’t do it for me. They had some fun banter but most of their romantic interactions felt more plot-convenient than heartfelt. I can say though, the resolution of this particular plot-thread had me grinning ear to ear, I’m probably in the minority here, but I was smiling down at the words as I read them, feeling smug and a little evil as I thought to myself,”Good.”

Knowing he ended up in that situation due to Mia’s actions was particularly delicious. I don’t know if that was what Jay Kristoff was going for, but it was definitely a highlight for me.

When it comes to highlights though none shines brighter than the world and its tree suns. Fantasy is my favourite genre because I love fantasy worlds and magic, simple as that. So, getting to read about a new and fascinating world is always a treat. Nevernight has it all: a complex religion with a mythology that didn’t seem lifted from any of the usual sources (Itreya is inspired by the late Roman Empire, but it doesn’t beat you up the head with it, mercifully — and interestingly, the main religion is a form of monolatrism which we don’t get to see very often in fantasy). A magic system that explained the reach and limitations of some of its components (I can’t get the weavers out of my head), while leaving others in the dark (Mia’s darkin abilities), without it feeling like its rules could change whenever convenient to the plot. And a political system that while not the focus of the book is the corrupt machine that keeps this fascinating, but often disgusting, world turning.

The use of footnotes for the info-dumps was brilliant, because they didn’t feel like info-dumps at all. And I often found myself looking forward to reading the next one. The narration should be credited for that. As of now the identity of the narrator is still a mystery (although I have my theories) but their voice is delightful to read, with a particular brand of dark humour that really suits the mood of the book.

This book is shelved as Young Adult on Goodreads, and although there’s definitely elements of that, it felt a lot grittier than most YA Fantasy, in a really good way. Sometimes YA books, regardless of genre, tend to be just a love-story masquerading as something else. This isn’t that, not by a long shot. And despite my misgivings about it the romance really doesn’t take up more room than it should, nor does it slow down the action. Besides, I would be lying if I said I would be opposed to seeing a romance involving Mia and someone I like better…

Overall, I really recommend this book, my complaints are very minor and by no means did they reduce my enjoyment while reading this. Funny enough, I started reading this book right as I was almost finishing Red Sister (because I was loving it so much and didn’t want it to end), and I was surprised to realise just how much the two books have in common. Although Red Sister is Adult Fiction, and grimdark to the more humorous grit of Nevernight they both happened to share a lot of superficial details, and hit on a lot of the same notes that made them both such stand out reads for me. If you’ve read Red Sister I definitely think you should give Nevernight a shot, it’s lighter, but not light, and Mia shares some of the traits that make Nona such a lovable protagonist, the supporting cast is not as strong but there’s a few gems.

I just checked back on Goodreads and a lot of the top reviews complain about the prose. The title of this book might have clued you in on that, but I vastly prefer books written in third person (I struggle to read first person more often than not), so this book already has that going for it, but I also consider the writing style to be a big plus. There were second person asides but they were barely noticeable. It’s simile heavy, some of them are wonderful, some are inconsequential, but none weigh the story down in my opinion. I wouldn’t call the prose lyrical or flowery but there is a melodic cadence to it. I really liked it, it’s what I’m saying. People who prefer cut and dry writing might not. That being said, I don’t think it’s complicated or hard to follow, at all.

Since I compared Nevernight to Red Sister, I can’t help but compare ratings too. And while I loved Nevernight I didn’t love it as much as Red Sister (it feels weird that I’m not posting that review first, but oh well), therefore: