Design a site like this with WordPress.com
Get started
Skip to content
24 de October de 2018 Carolina Carvalho

I loved this book so much, and I really need to thank Acqua for making me aware of it, which made me request it. I saw the title on Netgalley multiple times but the cover led me to believe this was a middle grade book for some reason — when it’s actually an adult retelling of Beauty and the Beast, set in a Vietnamese inspired fantasy world and with an f/f romance. 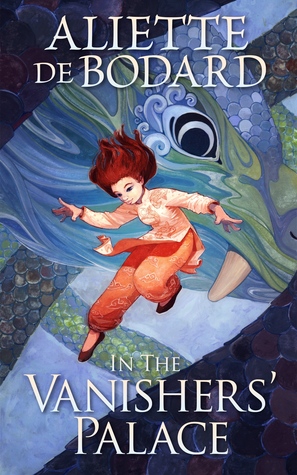 When failed scholar Yên is sold to Vu Côn, one of the last dragons walking the earth, she expects to be tortured or killed for Vu Côn’s amusement.

But Vu Côn, it turns out, has a use for Yên: she needs a scholar to tutor her two unruly children. She takes Yên back to her home, a vast, vertiginous palace-prison where every door can lead to death. Vu Côn seems stern and unbending, but as the days pass Yên comes to see her kinder and caring side. She finds herself dangerously attracted to the dragon who is her master and jailer. In the end, Yên will have to decide where her own happiness lies—and whether it will survive the revelation of Vu Côn’s dark, unspeakable secrets…

I was actually convinced retellings weren’t something I was that interested in until I read this, suffice it to say it changed my mind. This is a novella but the world-building is amazing, it isn’t spoon-fed to the reader or overly explained, and it only added to the feeling of eerie wrongness of Yên’s village, and Vu Côn’s palace. The world was broken by extraordinarily powerful creatures, called Vanishers, who did as they pleased with humanity and spirits alike, and then simply vanished leaving behind a world that was a husk of its former self. Society struggles, the poor suffer the most, people are seen in terms of how “useful” they can be to their community —  and disposed of when they overstay their welcome.

It’s a short book but it has the time to examine several themes, like the complexities of human relationships, and the kind of connections people form — how social hierarchies shape communities and destroy them, how people are capable of putting their own well-being aside in the name of what’s right. I enjoyed all those reflections, which were subtle and weaved through with the plot and tied to character development, and thankfully not a stream of consciousness info-dump. But what I liked the most was the theme of nature vs nurture when it came to Vu Côn’s children. I can’t get into too much detail because it gets into spoiler territory, but it was a great part of the book, and I loved Thông and Liên as characters.

I also appreciated seeing characters who used gender neutral pronouns like Thông and Elder Giang represented, and the little ways the world-building addressed that. They lived in a society who accepted them and that was reflected in things like clothing, forms of address, and myths and legends. It added extra immersion, and made the world feel even more real and dynamic, to the point it’s hard to believe this book doesn’t even have 200 pages.

I loved the romance too, Vu Côn and Yên are very different but equally compelling characters, and I loved the changes to the original tale. Vu Côn is a Beast with far more selfless motivations, albeit just as short and gruff at times. She also doesn’t feel like a prisoner in her own castle as much as prisoner of the Vanisher’s legacy, which is a more compelling narrative than “cursed by a witch”. I’ve never liked The Beauty and the Beast in part because the Beast always felt vaguely pathetic to me. Vu Côn is nothing like that, she’s strong and powerful and you never once doubt her abilities, she also doesn’t fly into rages which was much appreciated.

Vu Côn also stays a monster, which I absolutely loved. I should clarify that she is a spirit, and thus has both a dragon form and a human form, which she can change and meld together at will. Her regaining full human form is never a plot point and the book is all the better for it, because I for one love monsters, and I love romances that involve them. I’m actually determined to read as many LGBT books with monster/human romances as I can. I hope it becomes a trend. I want to personally thank Guillermo del Toro, and now Venom, for being pioneers, and bringing this genre to the masses.

The writing was delicious, it gave a real sense of setting and contributed much to the world-building. I loved all the descriptions of the Vanishers’ palace which is this mind-bending, physics defying ever-changing construction, that is dangerous to (almost) everyone who walks its halls and many rooms. It was such a fascinating place, and I could spend much more time there. The palace and all the constructs, inside and outside, were also great contributors to the sense of unease and foreboding. Even in absence the Vanishers’ presence hung like an oily film over everything.

My only complaint is that I wish this book were longer, and perhaps even a series, because I loved the world so much and would like nothing more than to return to it. That being said, I was still completely satisfied with the story as it was, and everything was perfectly resolved. I just want more because I’m greedy.

12 thoughts on “Book Review | In the Vanishers’ Palace”