I don’t know how to describe this book without just gushing meaningless praise, after meaningless praise. It was such an enjoyable, engaging, fun read, with plenty of humour that somehow lulled me into a false sense of security and then ripped my heart out with the ending (it was the good kind of pain). 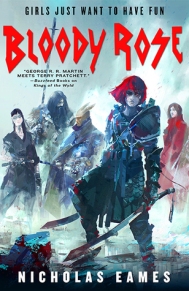 Tam Hashford is tired of working at her local pub, slinging drinks for world-famous mercenaries and listening to the bards sing of adventure and glory in the world beyond her sleepy hometown.

When the biggest mercenary band of all rolls into town, led by the infamous Bloody Rose, Tam jumps at the chance to sign on as their bard. It’s adventure she wants – and adventure she gets as the crew embark on a quest that will end in one of two ways: glory or death.

You know how there are a lot of books that you finish reading and think to yourself: “that would make a great movie”. Bloody Rose would make a perfect RPG, I’m salivating just imagining it. I’ve never actually read a book that reads so much like a game, and I mean that in the best way possible. The band is your traditional party: with spell-casters summoners, rogues, tanks etc. The enemies are “monsters” all different, and with varying degrees of sentience, which leads into the vast array of possible moral choices, do you go for glory or peace? Spectacle or Clemency? The adventure of the wyld or the comfort of home? The book raises all these questions, and the characters even find answers for some of them. But I can’t help being greedy and wishing I could get to play some more in Eames’ wonderful, fascinating, world and its really compelling lore. Ok, I’ll stop.

But to any game devs reading this, please make it happen.

Anyway, back to the story. It’s full of heart and humour for one. Some fantasy takes itself so seriously that it’s honestly a chore to get through, others are so superficial, so devoid of any deeper understanding of the world and its inner workings that it feels like the author wanted the trappings of fantasy but none of the work that comes with it. Bloody Rose offers a completely fleshed-out world, with politics and conflicts that are at once petty and urgent depending on which characters you ask, and where every character, no matter how minor, has their own unique voice, and their own part to play in the plot. Nothing is wasted, every scene is meaningful and hurtles towards a clear-cut objective and most importantly — conflict resolution. Yet this book feels indulgent, with plenty of quiet moments of introspection and camaraderie, where the chaos and urgency peels back and we can take a peek at the tender humanity that ties it all together.

Speaking of which. Tam is a wonderful protagonist, she is so likeable, and while psychologically flawed in the sense that she’s at once extremely insecure and a glory hound (maybe adventure hound is more appropriate, but she does bask and preen a little) I really appreciate that she’s physically flawed as well. You see, she joins the mercenary band Fable as a bard, a role that, unlike in video games and DnD, doesn’t come with any special skills beyond being able to play and write songs. She’s a competent archer and half-way through the books gets some more weapons training, but that’s about it. She tries to help her bandmates, and sometimes she succeeds, and sometimes she accidentally hits them with her arrows. She’s great, they like her anyway.

Tam is also a lesbian, something she tells you within the first chapter. Watching her flirt is adorable and hilarious at the same time, it works out in the end because no woman can resist her wide-eyed earnestness. She develops a romantic relationship with one of her bandmates, and it’s just so good. Their personalities are diametrically opposed, and there’s even a little bit of friction in the beginning, and it’s delightful to see the feelings grow between them. Don’t worry though, this isn’t a romance masquerading as fantasy, the romance is very much a B-plot to the central conflict, and it works well that way.

Every single one of Fable’s members has their own internal conflict and we learn about their motivations as they tie seamlessly into the main plot, just like all good side-quests should. Besides Tam, my favourites were Brune and Cura. Finding out Brune’s backstory was such a memorable part of the book. I loved how being a shaman was such a delicate balancing act between the human and animal side, and how “repression” featured into it. It elevated something that could be “wow cool power” into a deeper analysis of character. Cura literally summoning her demons to fight for her was also poignant in a very understated way.

In a way Rose was the character I felt the most distanced from. Which I wouldn’t say is a bad thing, she is meant to be this larger than life legend, and the figurehead of Fable, her character arc deals with exactly that. Wanting that fame and recognition, and once having it, realising that it strips her of personhood just as much as living under her father’s shadow did. Her relationship with motherhood is very interesting and honest. She loves her daughter, but being a mother isn’t a role she’s sure suits her. She’s a fascinating character, but her at once mythological existence and the narrative acknowledgement of her broken pedestal, makes it hard to see her in the same human light as the other characters. Which I say isn’t a bad thing because I think that was exactly the author’s intention.

Every Rose has its thorns though, and as much as I loved this book, I need to mention how much it annoyed me that it kept evading one conversation I very much wanted it to have. The thing with “monsters” in this universe is that they aren’t all mindless killing machines, they also aren’t controlled by a cosmical evil (a la darkspawn from Dragon Age), some of them are sentient, and a lot of them feel like regular “animals” a lot of the time. What this means is that I started feeling a bit uncomfortable with the carnage, and wondering if the book would ever address this. It did! Kinda. The characters talked about it, they expressed remorse sometimes, in one memorable occasion they tried to resolve things peacefully. But it doesn’t really go anywhere from there. At one point it feels like they will have to come to a really hard moral decision, confront the fact that humanity’s cruelty was responsible for the monster’s desperation and their willingness to join someone who promised them freedom from the humans, but a convenient deus ex machina meant they never had to. The decision was literally taken out of their hands!

Maybe this is a theme that will be dealt with in a sequel, that seems likely. After writing two fantastic books I doubt Eames is the kind of author who thinks referencing something is the same as analysing it. So I’m hopeful this won’t be a dropped plot-point and will be picked up in a later book!